7 Balinese Traditional Villages You Must Visit

You’ve already got the tan and you’re pretty tired of the crowded scene of the shoreline. Well, perhaps it is the best time to retreat for a while from the oceanic swells and go to Balinese traditional villages. But where to? The first one is Tenganan village. Tenganan is a stone’s throw away from the the main road of Candidasa. The village is famous for its traditional woven fabric named gringsing, but a fabric that will last a century and a half.

Besides the old woven fabric, you’ll also encounter several artsy things while visiting this village, such as wooden masks and lontar artworks. Once a year the crowds gather to enjoy the ambiance of the legendary Perang Pandan, where men fight each other using spiky pandan leaves. Shortly, it is one of the oldest villages in Bali which also practices one of the most peculiar ways to bury a dead person. Well, perhaps burying is not the right words for the deads are not buried at all there. The people of Tenganan put the deceased under a gigantic ‘taru menyan’ tree—an aromatic banyan tree—and let them decay naturally.

Don’t bother yourself to bring a mask or anything to cover your nose: it doesn’t smell at all. The strong scent of ‘taru menyan’ trees defeats the smell of the decaying bodies. Getting there is already an adventure since you must take a fifteen minute journey by boat from the shoreline of Lake Kintamani. Here’s my opening line to describe this village: this traditional village is so clean. ‘Yes? So what?’ Before turning awkward, I must tell you one thing: it is not easy to make a clean village especially in a tourist destination like Bali—where the ‘do not loiter’ signs are never taken seriously.

Located in the mountainous regency of Bangli, the village is so organized it looks like a big miniature, the roads and houses in the village are so orderly organized it seems artificial like that of The Truman Show. There is green grass bordering the stone pathway dividing the village. Come here around Kuningan and you’ll see a lot of penjor decorating Penglipuran village in yellow. Along the way from Sukawati to Kintamani, there’s a village named Celuk. Most of the people living in Celuk are either gold or silversmiths.

The curious mind like you won’t hesitate to try making your own jewelry there. The people would be glad to teach you some of the basic techniques in forging gold or silver jewelry. But if you just want to find something to bring back home, just pay a short visit to several jewelry shops in Celuk. Like Batuan, this village is three doors down from Ubud. (In fact, there are a lot of artistic village around Ubud regency. And Ubud is the place where the artists mingle and sell their artworks.)

This village is only six kilometers south of Ubud. Strolling around the village, you’re gonna see a lot of wood-carvingsthat are so miraculously detailed. They’re so neat that you’re gonna think they were made by a modern 3D printer. If you’re into occultism and arts, do not think twice before going to this village. It is also located in Gianyar. It’s not that you’ll run into a scene of The Conjuring or Insidious there, but many people believe that artworks made in the village possess some kind of magical power. Bring one home and you’ll get yourself a talisman!

“No, thanks. I only believe what I see.” No, problem. Putting the mystic aside, this village is gorgeous. The typical Balinese village you’ll expect, with gates and sculptures and all, but added with more artistic aspects. 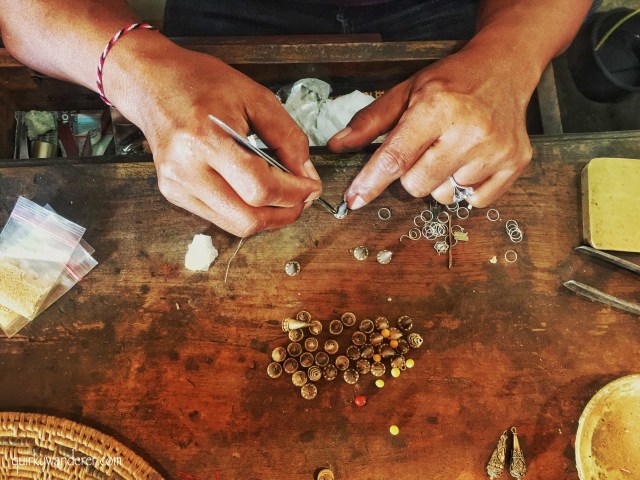 So which traditional villages you want to visit first?